Few things stir emotions amongst investors more than the price of oil. Most of us use oil in some form or another, and an increasing number of people do not want to use it at all.

Oil is also geopolitically sensitive and hugely important to most governments around the globe, whether they be net producers or consumers. It is for this very reason that the majority of global oil production is still controlled by governments and not companies such as Shell or Exxon Mobil who are simply price takers in most respects.

Like most commodities, the price of oil is determined by supply and demand, and in this article, we look at three reasons why this delicate balance could be disrupted and could, as a result, move the price of oil closer to $100.

Saudi Arabia is acting in its traditional role as the ‘swing producer’ moderating its production to defend the price of oil across the globe. However, the vast expansion of the shale oil industry in recent years has promoted North America into a key marginal producer. U.S. shale oil has accounted for no less than 80% of the rise in global crude oil supplies since 2010. However, it is not an unblemished story. The economics of U.S. shale oil production has been deteriorating for some time mainly because the production life of oil wells has been shorter than expected as the oil is released from the shale formations under extreme pressure. The shelf life of a well in a shale oil field is typically only two to three years.

We also had deep concerns about oil production in the developing world given the geopolitical problems in Venezuela and Iran which both hold significant proportions of global oil reserves and were subject to the threat of sanctions by the Trump administration: 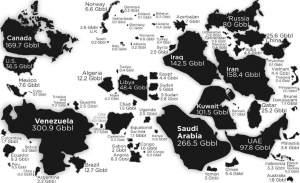 Much of the world’s oil supply exists as poor quality “sour” crude under the ground and needs a lot of refining to remove the high sulphur content. In response to heightening environmental concerns, the International Maritime Organisation (“IMO”) announced from January 2020 the maximum allowable sulphur content in Oil will be lowered from 3.5% to 0.5%. As a result, the demand for low-sulphur (sweet) crude oil will increase by as much as 2 million barrels per day. The traditional swing producers such as Saudi Arabi have little or no sweet crude and there and is not enough global refining capacity to convert sour grades to sweet to meet projected demand. This could create potential bottlenecks in supply with sweet crude benchmarks such as Brent and WTI rising significantly.

All of these supply problems caused us to raise our oil price expectation above market consensus. Much depends on demand as well, but a number of oil producing nations depend on oil being above $70 to help balance the books so we expected the price to be well defended in the event of any demand shock (in 2017 the price was in the mid-$50 range). Russia, Saudi Arabia and the U.A.E. are the biggest winners of rising oil prices with large oil-importing Emerging Market countries being the biggest losers: 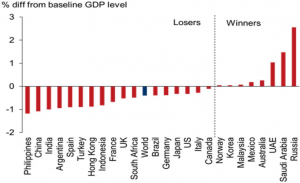 At Quartet we maintain our short-term “bullish” stance on oil and believe Russian equities (a position we have held in client portfolios for over a year), will continue to benefit certainly relative to other Emerging Markets, as a result. However, we are mindful that alternative sources of energy are becoming more dominant and we expect fossil fuels to be phased out over the next 10 to 15 years so do not expect to remain “bullish” on oil over the long-term.

Are we due a re-run of the Roaring Twenties? And if so, what does that mean? Julian Chillingworth, Chief Investment Officer, Rathbone Investment Management, looks back at the world’s last post-pandemic recovery and a bit more besides. As vaccine programmes…

The MSCI Alternative Energy Index (comprised mainly of wind and solar companies and their supply chains) posted an extraordinary 105% in 2020, more than double the Nasdaq’s over the same timeframe (42%)1. 2020 has seen previous long-term commitments to new…

The MPI Performance Estimates for February 2021 are now available to download. These estimates are based on our internal models of how client portfolios are likely to have performed over the previous month. To obtain your copy please click the…

Any cookies that may not be particularly necessary for the website to function and is used specifically to collect user personal data via analytics, ads, other embedded contents are termed as non-necessary cookies. It is mandatory to procure user consent prior to running these cookies on your website.